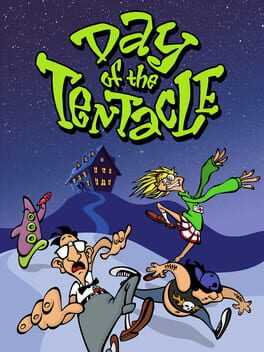 Day of the Tentacle, also known as Maniac Mansion II: Day of the Tentacle, is a 1993 graphic adventure game developed and published by LucasArts. It is the sequel to the 1987 game Maniac Mansion. The game's plot follows Bernard Bernoulli and his friends Hoagie and Laverne as they attempt to stop the evil Purple Tentacle — a sentient, disembodied tentacle — from taking over the world. The player takes control of the three and solves puzzles while using time travel to explore different periods of history.

Dave Grossman and Tim Schafer co-led the game's development, their first time in such a role. The pair carried over a limited amount of elements from Maniac Mansion and forwent the character selection aspect to simplify development. Inspirations included Chuck Jones cartoons and the history of the United States. Day of the Tentacle is the eighth LucasArts title to use the SCUMM engine, and the company's first title to feature voice acting.

The game was released simultaneously on floppy disk and CD-ROM to critical acclaim and commercial success. Critics focused on its cartoon-style visuals and comedic elements. Day of the Tentacle has featured regularly in lists of "top" games published more than two decades after its release, and aspects have been referenced in popular culture.