The devil was made famous in a classic book known as the Holy Bible. An evil being that lives in a warm place called hell. In video games, there have been plenty of examples where the devil has been depicted in the standard biblical setting that non gamers would recognise and be familiar with.

Over time, the devil has been used more as just a general bad guy who lives in the land of fire and brimstone but can also be used as a word to refer to some other kind of monster that is the main threat of the player of the game. 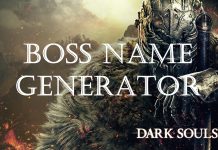 Namegenerator Dan Hastings- February 6, 2020
Dark souls is a video game that is known for its brutal difficulty and its dark tones. One of the bigger aspects of the game in terms of difficulty and scale are the boss fights. Dark Souls and any of...