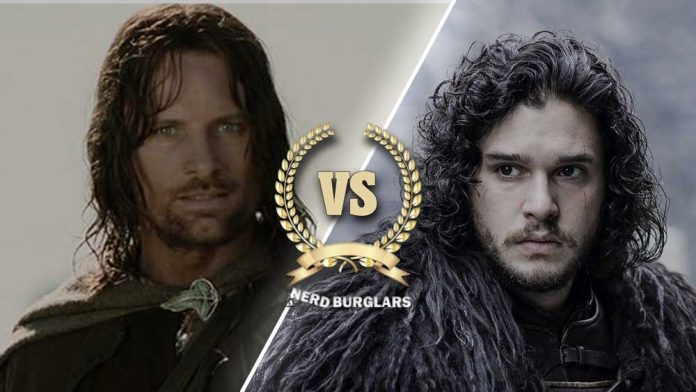 This one Isn’t fair is it? It’s like asking someone to pick their favourite child. Back when The Lord of the Rings was in its prime, Aragorn was the coolest fucker we ever saw. Remember the scene where he bowed down to the hobbits after he was crowned the king? Brought a tear to my eye.

Jon Snow is very much the Aragorn of Game of Thrones and depending on how the final season plays out, he may well become the king too?! Check out the who will claim the Iron Throne poll to have your say there.

Jon Snow and Aragorn possess a lot of the same qualities and traits. At the beginning of both stories Jon and Aragorn were both technically heir to the throne in their respective worlds. They are both skilled and brave warriors who seem to have a good heart and want what is best for humanity.

This poll may not be one that is as easy to vote on. The only thing we can probably all agree on, is that this one is going to be a very hard decision to make. Deciding who will win in fight is difficult as there is an emotional attachment to both of these characters. One may be more skilled than the other, but who wants to see either of these guys lose? Share any comments and opinions you have below, would love to hear them.

Who would win in a fight?

Of the two humble heroes from popular fantasy worlds, who would win in a sword fight?

Tap on an item below to cast your vote
Aragorn, Son of Arathorn
The lead warrior of the journey the Hobbits took in the Lord of the Rings franchise.
VS
Jon Snow
The bastard child who was adopted by Ned Stark came back from the dead and became an unlikely hero in the series.
SHARE
Share on Facebook
Tweet on Twitter