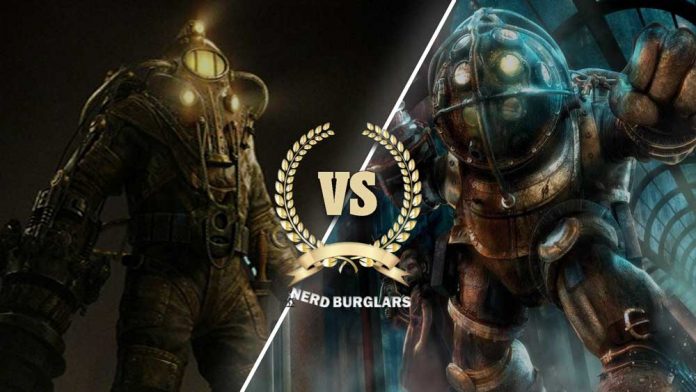 Bioshock stands out in gaming history as having one of the most unique and unusual settings in a video game. No one dare copy the idea for fear of getting lost within the shadow of rapture. As a whole, the city of rapture is loaded to the brim with people and events that are strange and unusual. It’s what made it such an incredible game after all. One of the most memorable things from the game are the Big Daddys.

In the original Bioshock there were two distinct Big Daddy models. The bouncer, which appeared on the games cover had a large drill and in battle would favor close range combat. The Rosie was a long range attacker and used a combination of grenades and the rivet gun to kick your ass. Visually, they are very easy to tell apart. The distinctions between the two make for a great comparison.

Edit: I know the Lancer Big Daddy from Minerva’s Den was awesome, maybe the winner of this can go up against the lancer?

Which is the Best Big Daddy?

Of the two main big daddies we saw in the original Bioshock game, which one did you prefer?

Tap on an item below to cast your vote
Bouncer
The iconic Big daddy character that we all remember well. The poster daddy of the original game.
VS
Rosie
The Rosie might not look as scary as the Bouncer, but he can still dish out a serious ass whooping.
SHARE
Share on Facebook
Tweet on Twitter
Leave A Reply