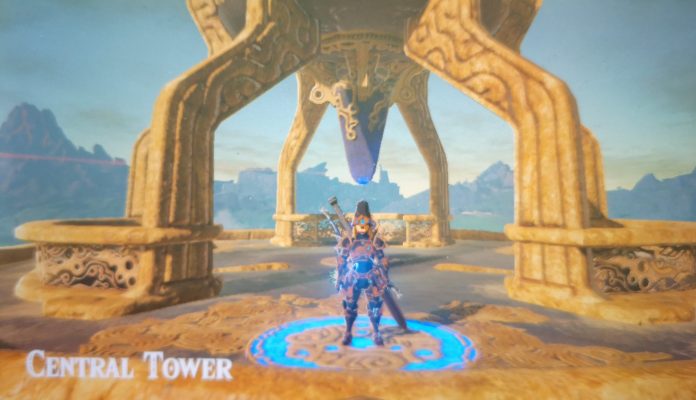 Central Tower is not a tower you can rush into at an early stage of the game. You have have encountered a guardian already at this point. If not, all you need to know is they are incredibly powerful. A relentless laser attack that explodes makes climbing the tower hard. Even if it’s not a direct hit, the blast will blow you off the tower as you attempt to climb it. This is a tower you need to come prepared for.

The tower is fairly easy to find, its in the center of the game’s map in a fairly open area. Getting close is where you will have real trouble. Since central Hyrule is mostly open plains, spotting this tower is fairly easy. The map below will show you the exact location of the central tower on the BOTW game map.

Climbing central tower is fairly straight forward. Before you attempt this though, you will need to do something about the guardians that are sitting around the base. Their legs are destroyed which prevents them from being able to move. They can still attack though. Be careful not to aggro any of the fully functional guardians that are running around the fields. You don’t need any additional problems here.

Destroying a guardian is simple once you have the right tools. An ancient arrow right into the eye is a one-hit kill. This is their weak spot, so any arrow to the eye will inflict a decent level of damage. You can destroy them using swords too but this requires you to get close. A perfectly times parry with your shield will bounce the laser attack back at a guardian, causing huge damage. Deal with them however you wish, so long as they are gone, you can climb the tower without too much trouble.

If you need help here, this video will help you out with it. Ultimately though, you will need to have the right gear for this job. Taking on guardians is tough. You need to make sure you are well equipped to deal with them.