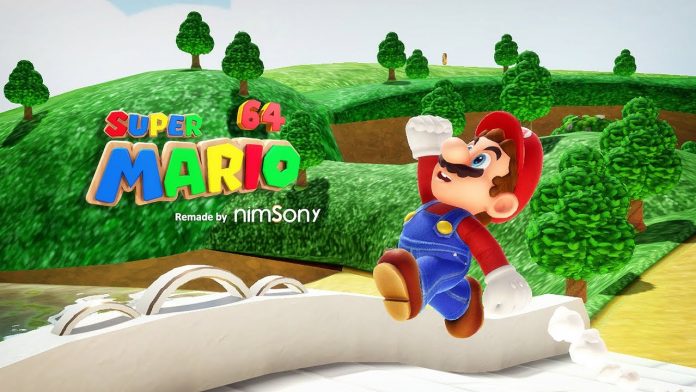 I try not to get too excited over fan made remakes anymore as pretty much all of them never materialise into anything. Today was an exception as I came across something where I am as impressed by the amount of effort that one guy has put into recreating one of Mario’s most iconic games.

HD remakes are something that we often dismiss as being an easy task. To some degree they are when you compare it to making a brand new game that does something new, but the task is by no meanss a small one. This is typically why we usually see massively ambitious remakes and mods come from the gaming community that never end up seeing the light of day.

Today I randomly came across this video from NimSony on YouTube. He has attempted to recreate Mario 64 and has done so with some incredibly quality. I have taken on some big projects over the years that have completely consumed every free minute of time I have had for a long period of time. Hearing him talk about the amount of effort he put into this has dwarfed anything I have ever taken on. This guy deserves an award!

Nintendo have a pretty strict policy of protecting their IP. Even if this was a complete game, Nintendo would have it shut down before anyone got to have a look at it. Even though this is not a fully completed remake, the amount of effort that one person had to put in to get this far is incredible.

Even if you have no intention of ever playing this, the video is well worth watching to appreciate what one person was able to. The courtyard around the back of the castle is something that stands out as being better than the original (even if it is missing ghosts).