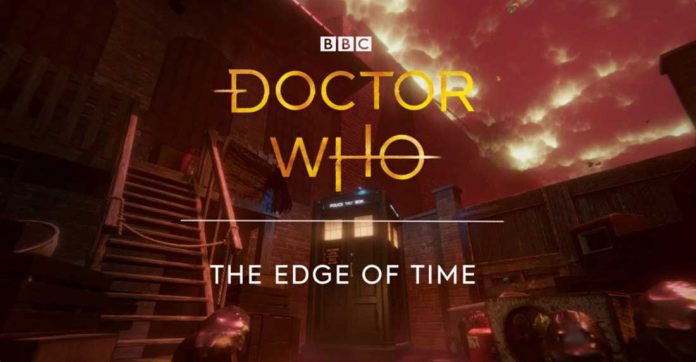 Back when David Tennant was the Doctor, I was alwas wondering why they never made a video game of it. Theres more than enough lore to make a game out of. Wars against the Cybermen and Daleks would have been awesome.

Once Matt Smith got the job, they ended up making a game. Unfortunately it was a side scroller that was not the most enjoyable game in the world, even when you looked past all the bugs and glitches that it had.

Fast forward to today…it seems there is a Doctor Who VR game on the horizon. This one looks pretty exciting too. From the media released so far, it looks like we are in for a proper 3D Doctor Who experience.

The game is titled “Doctor Who: The Edge of Time. There has not been any gameplay footage released yet, just some images and some basic design videos. From what I can gather, it is going to be a full on interactive game where you will be able to fly the Tardis! Here are some images and you can find a Q&A from the developer below.

Doctor Who: The Edge of Time Q&A

What is Doctor Who: The Edge of Time?

Doctor Who: The Edge of Time, is a fully interactive and feature-length VR videogame based on the globally beloved sci-fi television show, Doctor Who.

When it does it launch?

What platforms is it for?

Players will be armed with the iconic Sonic Screwdriver to solve puzzles, face classic monsters and visit strange worlds. They’ll also be able to fly the TARDIS!

Whats the story of the game?

The Doctor has been hurled through time to the end of the universe. A virus that threatens to rip apart reality itself has been unleashed. Journey across worlds both familiar and strange to recover a series of powerful time crystals that can repair spacetime and ultimately, save the universe itself.

Who is making this?

How is this different to the recently released VR title, The Runaway, also about Doctor Who and produced by the BBC?

Whereas The Runaway was an animated VR short film, The Edge of Time is a fully interactive and feature-length videogame, players will therefore be able to fully interact with the environment and characters as opposed to being passive participants!